Home > Types of Astrology > Astrology in the Bible 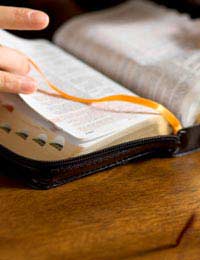 Here are a few examples of how you may find astrology in the Bible:

Ecclesiastes 3:1-8 is one of the most beautiful verses found in the Bible:

So beautiful is this passage that the words from it were turned into a song by Pete Seeger in the 50s. He recorded the song in 1962, but you probably remember it better as it was done by The Byrds in 1965. The Sixties were a time when many people were becoming aware that the Age of Aquarius was imminent. Some people believe that these words describe how the universe works on a cosmic, astrological clock, with a time for everything.

There are many mentions of the word "signs" throughout the Bible. Genesis 1:14-15 mentions how God created lights in the sky to separate the day and night and how they should serve as "signs" to mark the seasons, days, and years. In Luke 21:25-27, Jesus mentions how there will be signs in the sun, and in the moon, and in the stars when He returns.

The word "mazzaroth" is mentioned in the Bible in the Book of Job 38:32. In this verse, God says to Job "Can you bring forth the Mazzaroth in their seasons or lead out the Bear with its cubs?" There is a dispute over the meaning of the word mazzaroth, with it traditionally being interpreted as meaning constellation or constellations. This causes astrologers to believe that this passage refers to the zodiac, with Bear and its cub being used as a reference to an astrological constellation.

In astrology, a new "age" occurs every 2160 years, when a different sign of the zodiac comes into position to influence the Earth. The Bible speaks of "age" or "ages" in many verses including Matthew 24:3 (where it talks about the end of an age) and 1 Corinthians 10:11 (where it speaks of the fulfilment of the ages),

The Star of Bethlehem

Many astrologers point to the greatest story in the Bible as a sign that astrology is mentioned within it. That is the story of the birth of Jesus and the Star of Bethlehem. The Bible says the star was a sign from God to signal the birth of the Messiah. Astrologers believe the three wise men or Magi that visited Jesus were Persian astrologer-kings and were able to determine the time of Jesus' birth by the positioning of the Star of Bethlehem.

Of course, almost everything in the Bible is open to the interpretation of the person reading it. However, if you look closely, there seems to be some evidence that there are signs of astrology in the Bible. Whether you believe in it or not, astrology seems to have played a part in much of the history of humankind, so it would only make sense that it is mentioned within one of the greatest books ever written.

What is Kabbalistic Astrology?