Home > Types of Astrology > What is Chinese Astrology?

What is Chinese Astrology? 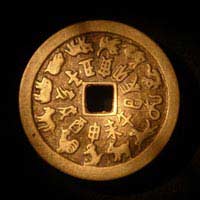 Have you ever been in a Chinese restaurant and noticed the Chinese zodiac on the placemat? If you have taken a close look at the zodiac signs, you will see they are very different from those of western astrology. This may be because the Chinese were so secluded from the rest of the world for so long; their astrology was not based on any outside astrological influences.

History of the Chinese Zodiac

Some historians estimate that Chinese astrology as been around since 2800 BC. Its zodiac is divided into 12 signs, with each sign represented by an animal. Each sign represents not a period of time within the year, but a whole year. How did it come to be that animals represented the signs? The origins of the Chinese zodiac are unknown, but there are two legends. Legend number 1 says that Buddha was lying on his deathbed when he called the animals from the forest to come and bid him goodbye. The first 12 to appear were the rat, ox, tiger, rabbit, dragon, snake, horse, ram, monkey, cock, dog and boar, so they were used in the zodiac.

Legend number 2 says that the Jade King was bored in the heavens, so he asked an advisor to send 12 animals so he could see what they did on Earth. The rat was the first to be invited and then invitations were sent to the ox, tiger, rabbit, dragon, snake, horse, ram, monkey, cock and dog the next day. But, there were only 11 animals, rather than the 12 the King had requested. The advisor ran back to Earth and hastily grabbed a boar.

The rat was ranked first in the order because he jumped on the back of the ox and played the flute. Because the ox was such a good sport, he was given the second position in the zodiac. All the other animals were assigned their positions, with the boar being in 12th place.

Rat – Being the first in the zodiac, people born in the Year of the Rat enjoy being at the forefront of things. They are restless and active, both physically and mentally. They love challenges and enjoy travelling.

Ox – Those born in the Year of the Ox are hard workers who are very patient. They like to help others, are intelligent and are often seen as leaders.

Tiger – Tigers are strong and powerful. These independent people can often inspire respect and sometimes fear in others, but they are courageous and very generous, too.

Rabbit – Those born under the sign of the Rabbit are quick to act on things, but often fail to finish. They are smart, practical and rarely aggressive.

Dragon – Dragons are lucky, artistic souls who have an exotic air about them, which makes them quite a hit with the opposite sex. Because the Chinese think so highly of Dragons, this is a desirable sign under which to be born.

Snake – Those born in the Year of the Snake are charming, seductive, wise and are usually good when dealing with finances.

Horse – Horses are likeable people who are intelligent and hard working, but sometimes impatient. They can acquire power and wealth easily, but frequently lack self-confidence.

Ram – Those born under the sign of Ram are likely to respect and follow rules. They are mild people who seem to have more good fortune bestowed upon them than the other signs.

Monkey – Monkeys are active, humorous people who like to socialise. They enjoy talking and making friends, but have a short attention span.

Cock – Those born in the Year of the Cock are often very self-assured. They have strong personalities and tend to be dominating in their relationships. They are very popular and like to be the centre of attention.

Dog – Dogs represent justice to the Chinese and the Dogs of the zodiac are those who are ready to give and sacrifice willingly to others. They are decent, warm, empathetic people.

Boar – Those born under the sign of the Boar are very honest and forgiving people. They do not believe in lying and therefore readily trust what others say without question.