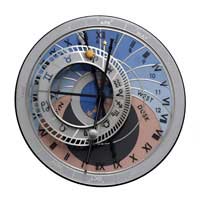 No one knows for sure just how long man has been looking to the heavens for guidance to help him understand both himself and those around him. Archeologists have found mammoth tusks with carvings that chart the phases of the Moon dating back as far as 10,000 BC., but the first recorded history of astrology dates back about 6,000 years.

Between 5000 B.C and 3000 B.C., the Hindus were using the stars as the basis of their religion. The reigning god of Hinduism, Vishnu, represents the sun personified. He can take the form of three astrological signs still used today - the ram (Aries), the bull (Taurus), or the lion (Leo). Indian astrology divides the sky into 28 equal parts (the Lunar Mansions) - one for each day of the Moon's cycle.

It was the Egyptians that first began to foretell a person's character based on their birth date. Egyptian architect and physician Imhotep wrote the earliest known horoscope in 2767 B.C. Star charts written by Egyptian astrologers that date back to 4300 B.C. can still be viewed today.

Although primarily cut off from outside influence, the Chinese also created their own astrology system. It was around 2800 B.C. that Emperor Yao developed the twelve signs of the Chinese zodiac. Chinese astrology also includes the five elements (wood, fire, earth, metal, and water) and the principle of Yin and Yang (negative and positive forces).

The Babylonians worshiped three gods based on the movement of the sky and growth of their crops - Sin the Moon god, Shamash the Sun goddess, and Ishtar the goddess of fertility (whose home was Venus). The Babylonians are also credited with creating the modern day zodiac. They divided the sky into twelve equal parts: Aries, Pleiades (changed to Cancer by the Greeks), Gemini, Praesepe (changed to Taurus by the Greeks), Leo, Spica (changed to Virgo by the Greeks), Libra, Scorpio, Sagittarius, Capricornus (shortened to Capricorn), Aquarius, and Pisces.

Greek astronomer Ptolemy is known as the father of modern astrology. His four-volume writing, the Tetrabiblos, was the most popular astrological work of its time. In it, he described the function of the planets, houses and signs of the zodiac. In ancient times, astrology played an important part in the studies of astronomy, mathematics, medicine and philosophy. Astrologers were well respected, often consulted by those in power for guidance. Legend has it that a bedside astrologer told the mother of Alexander the Great to wait to give birth until the stars and planets were perfectly aligned to increase his chances of greatness. Roman leader Augustus (63 B.C. - 14 A.D.) had coins minted with his astrological sign (Capricorn) on them.

However, astrology began to decline in acceptance after the fall of the Roman Empire. The birth of Christianity clashed with astrology as it often became seen as the work of the devil. However, some church figures, such as St. Thomas Aquinas, played an important part in the history of astrology, believing that the celestial bodies controlled everything and by the time of the Renaissance, astrology had become popular again.

Over the years, the popularity of astrology has risen and fallen many times. The rises tend to occur during periods where people are looking outside the norm for answers to questions relating to life and spirituality. The falls are due primarily to astrology often being linked with the occult. The United States saw a renewal of interest in astrology at the turn of the 20th century. Alan Leo's The Astrologer's Magazine was quite popular, helping spread the practice of astrology. Many of his books, still used today, were the first to explain astrology so the layman could easily understand it. Evangeline Adams is known as the "first American astrologer." Arrested twice for practicing astrology, she was acquitted both times, setting a precedent for professional astrologers to practice their science without persecution. She also had a very popular astrology radio program during the 1930's that helped gain converts.

The 1960s and 1970s saw another rebirth of interest in astrology as people, especially the young adults of the day, were looking for an alternative to mainstream religion. The whole counterculture era helped promote sciences such as astrology and the period is often referred to as the "New Age Movement." When meeting, the catchphrase "What is your sign?" became well known as people tried to determine if their astrological signs made them compatible with each other.

The history of astrology has been long and varied, but with the invention of the Internet, it is easier than ever to get a personalised horoscope, birth chart, and/or take tests online to determine compatibility with another sign. Today, many people use astrology for guidance in such areas as business, politics, sports, and even health.

How The Elements Affect Astrology
Share Your Story, Join the Discussion or Seek Advice..
Hi, I am having first child as baby girl who is 3.8 months old and in my family all have baby girl child. could you please guide us is there any chance of baby boy in my family. my date of birth is 07-aug-1985. Please help
Priya - 14-Aug-19 @ 1:20 PM
Hi Libby, I wanted to know your chart by way of rectifying the chart for Evangeline Adams. I would add your chart to the file for those that had a meaningful connection to her by synastry. Laurence Ely
Larry - 20-Jan-19 @ 2:09 AM
Title:
(never shown)
Firstname:
(never shown)
Surname:
(never shown)
Email:
(never shown)
Nickname:
(shown)
Comment:
Validate: