The Biography of Nostradamus 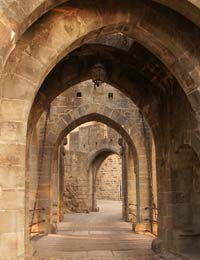 Nostradamus told fortunes not of people, but all of mankind. It is as if he read the horoscope for the entire world and tried to warn us all. His prophecies about the world and its happenings continue to fascinate each new generation. He is perhaps as well known today, almost 450 years after his death, as he ever was.

Michel de Nostredame was born on December 14, 1503 in France. His family was originally Jewish, but converted to Catholicism. There is not much known about Nostradamus' childhood other than Jean de St. Remy, his maternal great grandfather, educated him.

Nostradamus entered the University of Avignon at the age of 15, but was forced to leave a little more than a year later when the outbreak of the plague caused the University to close its doors. He served as an apothecary and studied medicine at the University of Montpellier. He was a well respected healer and even created a pill to help protect people against the plague. However, it is believed his first wife and two children all died of the disease in 1534. He traveled extensively after their deaths, finally settling in Salon, France, where he met and married his second wife, Anne Ponsart Gemelle.

Nostradamus wrote an almanac in 1550 and continued to write one each year after that. All in all, the almanacs contained almost 6,400 prophecies. Because of the success of these almanacs, Nostradamus found nobility, such as the Queen of France, Catherine de Medicis and other well-known people contacting him for personal horoscope readings.

But it was in 1555 that Nostradamus would write the document, The Prophecies, which would make him famous. At the age of 52, he wrote his first set of 100 quatrains. He wrote almost 1,000 quatrains in total, each using a mixture of Greek, Italian, Latin and Provencal. It is said that Nostradamus confused the time sequence to prevent being persecuted as a magician.

What exactly did his quatrains prophesise? Much of it depends on your interpretation, but it is believed he saw three anti-Christs who terrorised their own people. The first was Napoleon, whom people believe Nostradamus wrote about in this quatrain:

An Emperor shall be born near Italy.
Who shall cost the Empire dear,
They shall say, with what people he keeps company
He shall be found less a Prince than a butcher.

The second was Adolf Hitler. It is believed Nostradamus referred to Hitler in many quatrains including:

Out of the deepest part of the west of Europe,
From poor people a young child shall be born,
Who with his tongue shall seduce many people,
His fame shall increase in the Eastern Kingdom.

And many believe he only missed predicting Hitler's actual name by a few letters:

Beasts wild with hunger will cross the rivers
The greater part of the battlefield will be against Hister.

No one is sure if we already know the third anti-Christ or not, although Nostradamus predicted he would come from the Middle East:

Out of the country of Greater Arabia
Shall be born a strong master of Mohammed...
He will enter Europe wearing a blue turban.
He will be the terror of mankind.
Never more horror.

Nostradamus also prophesized about how the world would end. He painted a frightening picture of fire, war, misery and death, but also noted that humanity ultimately had the ability to change his predictions.

Nostradamus was believed to have even predicted his own death. It was on July 1, 1566 that his priest came to visit. When the priest left, saying "Until tomorrow," legend has it that Nostradamus said, "You will not find me alive at sunrise." He died during the night.

Through the years, people have argued about whether Nostradamus was a prophet or fraud. Were his quatrains predicting our future or were they so thinly written that they could have predicted any future? No one will ever know for sure, but even today, people are looking towards Nostradamus' quatrains for help and guidance.