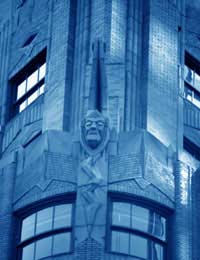 Around the turn of the twentieth century there was no American astrologer that was better known than Evangeline Adams was. But practicing her natural born talent was not always easy. Adams was arrested twice for giving readings. It is because of her fighting such charges that psychics and astrologers are free to practice today.

Evangeline Adams was born on February 8, 1868 in Jersey City, New Jersey. Although Adams wrote an autobiography, The Bowl of Heaven, much of her early life is unknown. She focused her book on her abilities and business rather than her personal life. We do know what little she tells us in the book – her father died when she was only 15 months old and he lost almost all of his money before his death, through no fault of his own. She does not elaborate on what he died of or what caused him to lose his money. Shortly thereafter, the family moved to Boston.

She worked for a time as a secretary before she left to start practicing astrology full time. It is believed that a man named Lord was her employer and she was briefly engaged to him. However, she claims she lost her feelings for him and broke the engagement. This was almost unheard of at the time, so we can see how Adams was not afraid to break taboos – social as well as religious.

Adams studied astrology for about eight years before she began practicing it full time. Her first instructor, Mr. Heber Smith, was a physician who used homeopathic techniques and astrology to make his medical diagnoses. He may have encouraged Adams to be independent and liberal in her views – to realise she was in control of her own destiny. She later studied under Dr. George Adams, who used astrology to treat his patients at an insane asylum in Massachusetts.

During Adams' time, most of America was still very conservative. They saw astrology as an abomination against God. Anyone who believed in or practiced astrology was seen as unorthodox. Following the advice given in her own chart, Adams moved from Boston to New York on her 31st birthday. She took a room in the Windsor Hotel and immediately told the owner, Mr. Leland, that the hotel was in imminent danger. The next day, the hotel caught fire and Adams prophecy was the headline of the paper. This brought Adams immediate fame and her career took off.

However, she was arrested for “fortune telling” in 1911 and 1914. After her second arrest, she decided to fight the charges. She was acquitted and that led the way for other astrologers to be free to practice without threat of arrest, although it appears that the law against fortune telling remained on the books.

Throughout her life, Adams wrote several books on the subject of astrology: Astrology, Your Place In The Sun, Astrology, Your Place Among The Stars, and Astrology for Everyone. Many attribute the predictions of World War II and the stock market crash in 1929 to Adams, as well as the deaths of tenor Enrico Caruso (who frequently consulted her for advice) and actor Rudolph Valentino. It is believed that she gave over 100,000 readings during her career, which ended with her death in 1932.

There are more biographies of famous astrologists on this site, including Nostradamus, Marc Edmund Jones and Jonathan Cainer.