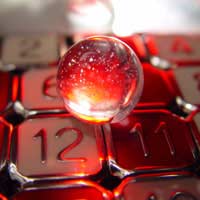 Numerology is the system in which there is a relationship between numbers and humans (or other living things) and objects. It is often associated with other mystical practices such as astrology psychic phenomenon, and tarot readings. By reducing a name or date to one number, it can give you more insight into a person’s personality (if a name is reduced) or an event (if a date is used). There are even some astrologers who use numerology, believing that the numbers 0 through 9 are ruled by the 10 celestial bodies.

Numerology, often being associated with the occult, has been in and out of favour with society for years. It did experience a rebirth in the early twentieth century when L. Dow Balliett published a series of books on numerology between 1911 and 1917.

Those that practice numerology are often referred to as numerologists. They apply definitions to numbers and use those in combination with each other to find meaning in a name or date. There are variations among numerologists and even between different cultures, but common examples of number definitions are: 0 (everything and nothing), 1 (individual, aggressor, yang) 2 (balance, union, yin), 3 (communication/contact), 4 (creation), 5 (action), 6 (reaction, responsibility), 7 (thought, consciousness), 8 (power, sacrifice), 9 (completion), and 10 (rebirth).

As different cultures use different definitions, they also use different means of calculation. The methods vary between Chaldean, Pythagorean, Hebraic, the Helyn Hitchcock’s method, Phonetic, Japanese and Italian.

While some religions shun numerology as an occult science, there are references to numbers in the Bible. There is the Number of the Beast, associated with the anti-Christ in the Book of Revelation. This number is believed to be 666, but it is not certain as 616 and 665 appear in some older text sources. Many religions such as Judaism and Christianity associate the number 1 with God. For Christians, the number three is often associated with the Trinity of the Father, the Son and the Holy Spirit.

Numerology is yet another way to help us understand ourselves, others and events that happen. It may help you gain a better understanding of relationships, learn how to deal with difficult personality traits your partner may possess, or even teach you how to be a better person.